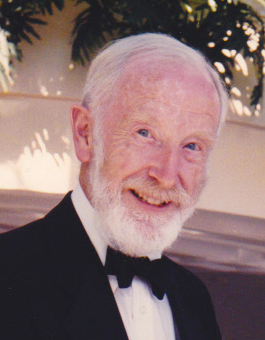 Dealtry Fairbank was delivered into this world by his mother in their English home on 6 May 1924 and Bill Fairbank left the world on 25 February 2022, 5 days after experiencing a cerebral hemorrhage. His daughter, Angela, was holding his hand when he breathed his last breath at Cottage Hospice in Vancouver, and our world will never be the same.

In 1937, Bill’s father asked him what he wanted for his 13th birthday. He didn’t like the name Dealtry as it was difficult for people to pronounce, let alone spell, so he asked to be known as Henry. His father said he didn’t particularly like the moniker Henry, but it was his father-in-law’s name, so they compromised, and as of age 13, he was called Bill, except by three aunts who continued to call him Dealtry until their dying days.

It is impossible to conceive how this modest, soft-spoken, under-the-radar individual could achieve what he did in a mere 97 years. Perhaps the most appropriate explanation is that he lived a life of service.

Bill was educated at Oxford University and St. Bartholomew’s Hospital in London. He met his wife, Pamela, at Oxford in 1943 while playing quartets as members of the Oxford University Musical Club. Following his medical training, and at the end of the war, he served as a medical officer with the Royal Air Force in occupied Germany and Austria.

Before immigrating to Canada in 1952, he completed a course in postgraduate obstetric studies in Dublin. He has the distinction of being one of the first interns to train at Royal Columbian Hospital in 1953. At Bill’s suggestion, Pamela immigrated to Canada in 1954, and they were married at St. Mary the Virgin church in Sapperton, New Westminster, in 1955. They raised four children and had six grandchildren. Sadly, Pamela died in 2016 after 60 years of marriage, leaving Bill on his own for the next 6 years. With family support, he was able to grieve and rebound, focusing on continuing his remarkable life.

From 1953, and for 4 decades, Bill provided exemplary cradle-to-grave medical care to his patients. During that time, he was an active staff member of St. Mary’s, Royal Columbian, and Eagle Ridge Hospitals. He was involved with intern selection and training and served as chief of general practice at Royal Columbian Hospital and as president of the Westminster Medical Association. He also served on the Medical Advisory Committee of both Royal Columbian and St. Mary’s Hospitals. He is fondly remembered by his GP colleagues.

Dr Susan Payten reminisces: “One day when I was in the doctors’ lounge at St Mary’s (perhaps in the 1990s), I ran into Bill reading a journal article in the lounge, which also served as the hospital library. I was so impressed when, during our conversation, he informed me that he always dedicated one afternoon a week to medical education. For a short while (a very short while, I confess) I tried to do this too, but lacked the time management skills to keep it up.”

Dr Payten also recalls meeting Bill one winter day, long after he had retired and moved to Vancouver. He was cross-country skiing on his own in Whistler. She remarked that she hoped to be as physically and mentally active if she lived as long as he did.

John Yap remembers Bill as standing tall, impeccably dressed in a suit and tie, and always perfectly groomed, as any proper English gentleman would be. He always had a kind word, and John, too, was impressed how active physically and mentally Bill was after retirement, and how he would attend university courses “to keep the neurons firing.” He was definitely one of a kind.

Bill’s children provide invaluable insight into the household of a dedicated family physician—the impossible balancing act! Angela remembers one or two Christmas dinners that were disrupted by his being called away for a house call just as he was about to carve the turkey. Yet also at meals the whole family could be found discussing medical issues, something Angela believes made her immune to dissections as a translator of autopsy reports and caused her not to flinch when witnessing the dissection of a mole on a lawn in Honduras during a medical mission with her father, in which she volunteered as a Spanish–English interpreter.

Nicholas adds that they grew up at a time when children didn’t have to check in constantly. “I recall taking off on my bike on my own for long periods of time (without a helmet, of course), simply announcing that I was going bike riding.”

Martin comments that “in terms of a parenting role, what comes to mind is [our father] leaving the office early on Wednesday afternoons so he could pick us up from elementary school and take us hiking or fishing.”

Angela quips, “When questioned in elementary school [about] what extracurricular activity he might like to enroll in, my father asked to learn the piano. However, his father didn’t think it was a good idea, and they had no piano at home anyway, so he was signed up for boxing lessons instead. Being the peaceful man he is, I’d like to think he’d prefer to walk away from a fight . . . but recently he confessed that once, in his 80s, a young man tried to mug him at an ATM. Instead of calmly handing over his wallet as the young man demanded, he turned around and punched the hoodlum on the nose! The young man was so surprised that he ran away. Who would have imagined that his boxing lessons would give him the needed courage some 70 years later?”

Despite Bill’s tendency to keep his light under a bushel, he was nevertheless recognized for his dedication to his patients, his community, and the medical profession. The following are but a few examples:

Bill had no difficulty exploring extracurricular activities outside the medical profession. After his children were grown up and on their way to pursuing university studies and careers, he became a Big Brother and mentored five Little Brothers over a period of 18 years. This always involved outdoor activities such as hiking, camping, canoeing, and sailing. His own children benefited from the same attention.

For 25 years he was involved in Camp Artaban on Gambier Island (an Anglican summer camp for children). During many summers he volunteered 1 to 2 weeks of his time in roles such as lifeguard, boating and swimming instructor, waterfront director, out-tripping director, and, on occasion, overall camp director.

Religion and music were always critical elements in Bill’s life. He was an accomplished cellist and singer. The New Westminster Civic Orchestra, Vancouver Philharmonic Orchestra, and Elgar Strings were among the groups he participated in as a cellist over the years, and he could always be called upon to form a chamber music group as part of a trio, quartet, quintet, or larger group. He sang in church choirs from about age 9, including St. Mary’s Sapperton for 27 years, then Holy Trinity Cathedral in New Westminster, St. John’s Shaughnessy, and until fairly recently, St. John’s Vancouver. He was also a member of several secular choirs, including the Bach Choir in England and the Handel Society of Music and Gloria Dei Chorale in the Vancouver area.

Bill was a supporter of the M2/W2 Association (Restorative Christian Ministries) and played an active role for 2 years, including visits to the New Haven Correctional Centre in Burnaby. On occasion he would escort inmates to appointments, and he attended symposia regarding the justice system.

In 2005 he joined the Brock House Society seniors’ centre, where he was involved in many activities, including its orchestra, discussion groups, bridge, cycling, and hiking. He was still an active woodworker at age 97!

While still in medical practice, Bill participated in a number of short-term medical missions under the auspices of the Christian Medical Society in Central and South America between 1982 and 1992, including six in Honduras, two in the Dominican Republic, and one each in Ecuador, Belize, and Mexico.

After retiring in 1994, Bill volunteered for 10 years, 8 to 12 weeks at a time, at Hôpital Bon Samaritain, an American Baptist hospital in Limbé, Haiti. He participated in the daily triage of several hundred patients, including emergencies, with a special focus on pediatrics. To improve his communication skills for these medical journeys abroad, he took Spanish courses at UBC and acquired a working fluency in Haitian Creole.

As a final note, Bill had a lifelong infatuation with William Shakespeare. He was one of the original members of the Shakespeare Society of Vancouver, founded in 1993. Some members of the Society have provided insight into his role at the monthly gatherings. Hoshang Shroff tells us that Bill’s contribution was to assign speaking roles for each play chosen by the members. He also served as chair for the meetings. Phyllis Chow adds that Bill was the epitome of an English gentleman and a great source for Shakespeare’s works, plays, and sonnets. “He would regale us with sweet songs from the plays (he was the only one who dared to sing).” Moreover, she enjoyed the Victoria sponge cakes he would bake for their afternoon tea. Bill brought them his passion for life and for Shakespeare.

To quote the Bard, Bill, “may flights of angels sing thee to thy rest.”
—Jack and Ruth Albrecht
Burnaby
—Angela, Nick, Martin, and Tim Fairbank