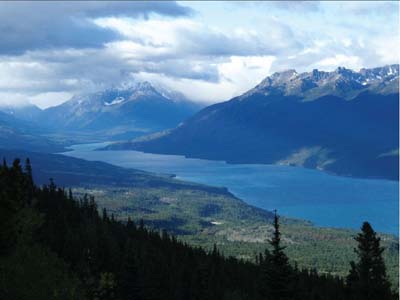 The saga began inauspiciously in the 7-Eleven parking lot in Burns Lake, BC. My wife Leslie and I were returning from a windsurfing vacation in Oregon with our equipment on the roof of our overburdened Toyota Tercel. “Ever been to Tatlayoko Lake? Supposed to be good windsurfing there!” cried a voice from across the pavement.

“Where’s that? I replied.

That night at home we dug out our maps and promised ourselves to visit this mysterious area known as the West Chilcotin. We drove into the Tatlayoko Valley on a glorious, sunny day the following spring and we were hooked. People laughed when we told them we were moving away from Smithers because it was too big, but after nearly 25 years in the same place it was time for a new adventure.

Getting back to the basics
Tatla Lake is halfway along Highway 20, which stretches 600 km from Williams Lake to Bella Coola. Each of those towns has a hospital. Tatlayoko Lake is about 35 km south of Tatla Lake at the end of a dirt road. After arriving in the community, we soon learned that there had been a GP practising in Tatla Lake many years ago, but that the community had not had a physician since the Interior Health Authority took over jurisdiction of the area from the federal government.

The West Chilcotin Healthcare Centre in Tatla Lake is staffed by an excellent RN and receptionist. The clinic itself is uninspiring—cramped and lacking lab and X-ray services. There are a couple of small offices with supplies and charts stacked high out of necessity. The only sign of newer technology in the treatment room is a lone videoconference machine that rarely sees use. Practising medicine here is back to the basics: good history, good physical, and good judgment.

The journey toward establishing a practice in this remote area was surprisingly long, convoluted, and difficult. After considerable deliberation, we renovated a room in the bottom of our house and hung up the proverbial shingle. One of the prerequisites of being a patient was having access to a four-wheel-drive vehicle, as our 3 km driveway was a little bumpy, and climbed, zigzagging, more than 150 m vertically from the valley floor. When it got icy and conditions were really bad, we would chain up our truck and shuttle people up from the main road after they radioed us (there was no cell service for 300 km).

After a couple of long years, the patient load became large enough that the home office became unworkable. We then approached the IHA and proposed setting up practice in Tatla Lake at the nursing station.

Working at the clinic with a remote certified nurse and a receptionist was a definite step up from working alone at the home clinic. The variety of patients runs the gamut from infants to octogenarians. As with most practices, the bulk of the clinic activity involves chronic disease management, with hypertension and diabetes sitting at the top of the list. Coming in a close third in diagnoses is cancer of all types.

In the past couple of years we have had several palliative care patients whom we have been able to assist in their wishes to die at home with their friends and family. This of course necessitates frequent home visits where one really gets to appreciate the pioneer spirit of the ranchers who opened up this country. It is a tough life, and one can see why few of the offspring are willing to take over the family ranch and try to make a go of it.

Although not officially on-call according to the IHA, I do make myself available most of the time if there are emergencies requiring extra assistance. Despite the relatively small population, there are a surprising variety of acute challenges in Tatla Lake. Most of the locals don’t call 911 (too complicated); they just phone the nursing station, and the nurse then calls me if she wants assistance. I have also been part of pilot project with the BC Ambulance Service to respond to calls in a wider area. Response times for regular ground crews from Williams Lake can be 3 to 4 hours or more. There are ambulance stations in Alexis Creek and Anahim Lake, but they are chronically understaffed and frequently have no coverage at all.

Depending on the nature of the call, the available resources, and weather, we will sometimes use a local helicopter that is stretcher capable. The big advantage is the savings in time, but the big disadvantage is that you can’t do much in the way of patient intervention while in the confines of a helicopter. Since most people here live on acreages, the chopper can land in the front yard, making transferring the patient that much easier.

To add to the variety, some pregnant women who want to try and beat the odds hang out locally for as long as possible before heading into town. It doesn’t always work out as planned. One lady showed up at the house with ruptured membranes and 5 cm dilation, and proceeded to deliver a baby girl in the home office. The cleanup took longer than the delivery. Another lady delivered her third boy at home with a nuchal cord. The infant required bag mask resuscitation, but subsequently did well.

One of the hardest aspects of rural practice is being prepared for anything. I have about 14 different bags of equipment, supplies, and drugs. A couple of years ago I got called in the middle of the night to head to Anahim Lake in a vicious snowstorm to see a 25-day-old infant who was in respiratory arrest. It was snowing so hard I could barely see the road, and the usual 1-hour trip took double that. I get ribbed from the local helicopter pilot about overloading with all my medical “junk,” but in that case, I was very grateful that I had brought a 3.5 ETT and a neonatal-sized BVM and mask.

It is amazing how much stuff I use with just one sick patient. Restocking isn’t easy—everything has to be ordered from town and shipped out. Drugs go out of date quickly, and I then find myself out on a call needing the one drug I don’t have.

Usually the trip into town in the ambulance goes quickly because I’m busy. The trip home is often at 4 a.m. and, for me, the 3-hour trip drags on because I can’t sleep. Although Highway 20 is paved, the frost heaves make for a lot of motion, and in the confines of the ambulance box, nausea is a constant partner. The nurse and I take turns bringing water and granola bars to fuel ourselves.

E-mailing Antarctica
Just as my discovery of the Tatlayoko Valley was a twist of fate, so too was my connection to Dr Rob Coetzee, my soon-to-be replacement.

I was at the office of my family doctor, who just happened to be the president of the local medical staff and involved with recruiting new physicians to Williams Lake. Just that morning he had been communicating with a potential recruit who had turned down the offer, claiming that “Williams Lake was too big.” I obtained the candidate’s e-mail address and after sending Dr Coetzee a note, received a quick reply from Antarctica where he was at the start of a 1-year sojourn as team doctor at the South African research station.

Unfortunately we were unable to speak on the phone, but the research station has access to a slow Internet connection which allowed e-mail and picture downloading.

I quickly discovered that Rob was an avid fly fisherman and had been dreaming of living and working in British Columbia for a number of years. This was no doubt due to glowing reports from his compatriots who had already transplanted themselves to this faraway land.

I proceeded to flood his mailbox with a slew of photos that highlighted the natural beauty of the Coast Mountains and Chilcotin plateau. Within days the hook was set deep, and there was no escaping—Dr Rob was coming to Tatla Lake, and he’d never even been to Canada!

I did my best to be honest about the difficulties associated with living and working in an underserviced area with no backup and diagnostic capabilities, but he was undeterred. His 10 years of experience as an ALS paramedic prior to medical school would no doubt serve him well, and in addition, his anesthetic and emergency background made him a perfect fit.

Passing the torch
What keeps us here? The immediate access to pristine wilderness literally out our back door. No lights, no noise, no traffic, no cellphones; one really has the chance to live an uncomplicated life. Your patients are your neighbors—a sense of community and belonging that is hard to beat.

Although I am retiring, it will be with mixed emotions. It is satisfying to know that the foundation laid by establishing a practice in this remote area will be a stepping stone for a new physician who is an adventurer at heart. I can only hope that he will obtain the same fulfillment from the challenges and rewards that I have.

Dr Smialowski is a retiring family doctor and GP anesthetist. He worked in Smithers and the Bulkley Valley District Hospital for nearly 25 years before relocating to Tatla Lake in March 2005. He is the first resident doctor in the area since the 1970s, when Dr VanderMinne practised in the community.