They took a leap of faith in the 1970s. Now, starting the 2010s with a new EMR, the Caledonian Clinic physicians share their experience.

Caledonian Clinic is a busy medical practice in Nanaimo with a radiology facility, a surgical room, and 65 full-time and part-time general practitioners, specialists, and staff. It is one of two or three of the largest private practice clinics in BC.

In January 2010, Caledonian Clinic switched from an early electronic medical record (EMR) implemented in the 1970s to a new and up-to-date system, dramatically expanding their use of their EMR.

True EMR pioneers, the lead physicians and the clinic’s manager have agreed to share their story and allow us all an opportunity to recognize their quiet, longstanding leadership in this field.

EMR pioneers
Doris Gross has been a witness to the clinic’s early EMR stages since the 1970s. She was hired as a front-desk receptionist in 1978, just when the physicians were trying out the first computer system. “I remember how proud I felt that we were a computerized clinic and how impressive those big servers and tape drives were to the outsider,” she says. 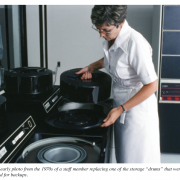 “Back then, the front-desk computer screens were inset under the counter because it was felt that it was all a bit too new for the patients.”

While state-of-the-art for its time, the system was limited to patient scheduling and registration. Around that time, Ms Gross learned how to do the backup for the clinic’s computer system. And that wasn’t an easy task. “Those big drums were very heavy and I had to lift them in and out of the servers to do the backup. I had to take off my rings because the heat could burn my fingers through my rings if I accidentally touched a wire. The servers took up the entire basement of the building, a space equal to the clinical areas.”

In the late 1990s, Gross was promoted to a personnel supervisor position and then became the practice manager in 2004. All that time she worked with the EMR vendor and IT support people to ensure that the system was responsive to the physicians’ needs. Ms Gross refers to “calling Boston” for support, talking to the original programmers, and shimmying under big servers to redirect wires—long before the days of software configuration or remote vendor support.

Caledonian’s EMR was based on the COSTAR system developed at Brig­ham and Women’s Hospital in Boston. Over the years it was advanc­ed to include abilities for transcriptionists to enter information dictated by the doctors.

By 2009, however, Ms Gross and the clinic saw that they couldn’t possibly make it do the functions required by clinical practice today, such as receiving electronic lab results interfaced directly into the EMR from Excelleris, advanced chronic disease management, or electronic referrals.

While central to the functioning of the office, the physicians themselves really only looked at the EMR to view information; they still wrote down or dictated everything. Even prescriptions were written and transcribed into the system.

The cost to change the system was daunting, but the funding offered through the 2007 Physician Master Agreement created an opportunity to again bring the practice to the forefront of technology.

Dr Mel Peterman was a GP in Nanaimo at the time Caledonian Clinic first implemented EMR; he later went on to be elected BCMA president. He says, “Unlike now when we enjoy the benefits of collaboration, back then clinics in Nanaimo were quite competitive. I saw what Caledonian was doing with EMR, and I started to develop my own EMR.”

Dr Peterman went on turn his EMR into a commercial enterprise supporting several clinics, and he later sold the business to another EMR company to return to focusing on his family practice. Now semi-retired, Dr Peterman is again helping physicians make the transition to EMR, this time as a peer advisor with the Physician Information Technology Office (PITO).

Over 30 years later things have come full circle, as Dr Peterman was the one who helped Doris and the Caledonian physicians ensure a successful EMR conversion and implementation. “It is wonderful to have access to that kind of experience and unbiased advice,” says Ms Gross.

30 years later
When Ms Gross and the physicians decided to make the change, they weren’t just changing EMR products. They were embarking on a complete change to their clinical workflow. Rather than simply reviewing the EMR, the physicians would now be directly entering data into the EMR through typing and voice dictation. Some of the new functionality included:

The clinic switched from the old electronic system to the PITO-qualified EMR at the beginning of 2010. Ms Gross acknowledges that the transition wasn’t easy because the staff had to learn how to use the new system and there were some changes in the workflow as well.

“An example of change to our workflow would be in the referral department: with the previous system the process was manual, but with our new EMR it is all done electronically,” Ms Gross says. “The physicians now enter the patient visits into the computer, but with our previous system they would either dictate or write the patient visits on an encounter form and the staff would input the information into our EMR.”

The clinic’s PITO local relationship manager, Shelly McNeil, herself an EMR veteran, observed the change first hand as she supported the clinic through the transition. “They were amazing. They were committed, they did the hands-on training, and they jumped right in. This was a tremendously complex conversion and implementation, yet they just did it. Over­night the physicians went from three decades of primarily view-only use of the EMR to immediately entering en­counter notes, prescriptions, allergies—everything.”

As part of the system change, the clinic arranged with their vendors to do a full data conversion, something often thought to be nearly impossible, particularly with such an old and unique system.

But this way, the clinic was able to be up and running on day one without having to constantly refer to two systems and run the risk of missing important information, as observed by Dr Les Bradley: “It is not easy to migrate from one EMR to another because you are out of your comfort zone. Although it is tempting, never use two EMRs at the same time.”

While the staff and some of the physicians are happy with the change, Dr Bradley, who started out in Nanaimo in July 1970 and was involved in the first EMR installation, finds it hard to get used to typing all the data himself. “With the old system the clinic used stenographers to put the patient information into the computer. With the new system I have to type in everything. It’s like getting remarried,” he says.

Dr Bradley believes that the move from paper to an electronic system is easier than the transition from one EMR to another, a comment made by many who have converted to EMR and later changed EMRs.

“It’s easier because you have no burnt-in EMR reflexes,” Dr Bradley explains. “It’s like when the power is out and you know it, but you still try to switch on the lights when you go into a room. I have to stop doing that.”

The transition to the modern electronic system has already helped the clinic save time and money and reduce the environmental impact. “This pro­cess has cut down tremendously on printing of day sheets and encounter forms, so we are saving trees in the new process, too. We have great staff and physicians at the clinic, and because of their hard work and dedication to the new EMR, the transition has been successful,” Ms Gross says.

One of the benefits of the new electronic medical record system has been the ability to download the lab test results directly into the EMR. Physicians used to receive test results in 3 or 4 days. Now the clinic gets the results on the same or next day. This not only saves time but allows the physician to contact the patient sooner, if necessary.

While it is still early days using full EMR functionality, the clinic is already starting to see the benefits. Dr Harry Latham observes, “It enhances the quality of care. You don’t have to sort through a bunch of papers, you don’t lose or misfile lab work or consultation letters, and you don’t have to run around looking for paper charts.”

Plans for the future
Once the clinic has settled in with the new EMR, it looks forward to using more of the advanced functionality that the prior EMR didn’t have.

Ms Gross says the clinic doesn’t plan to rest on its laurels. “Next we will be starting to use the chronic disease management tools such as flowsheets, recalls, and analytical tools, and then we look forward to using the template configuration tool to create templates for documentation and requisitions. This will allow us to really enhance our care of patients with chronic condi­tions and complex care requirements.”

The physicians at Caledonian Clinic would like to form a PITO Community of Practice in Nanaimo but they have held off until they get more used to the new EMR and until some of the remaining practices complete their implementations. In particular, Ms Gross wishes there were some improvements in the communication between GPs and specialists.

“All the new PITO vendors could interface with each other. I would like to see patient records sent to a specialist when the patient is referred. This would save time and also would give the specialist the patient’s total EMR, which would initiate better patient care,” she says.

For more information on the Caledonian experience, see the full history and technical details under Case Studies at www.pito.bc.ca.